There was some controversy over the cost of the fire station and the ability of the community to recruit and train volunteers, therefore local residents arranged to do the interior labor themselves. The comforting thought that aid is nearby if there should be a fire, made it all worthwhile. Many who volunteered were men with specialized talents such as welders, plumbers, and electricians. These were all skills that were needed to complete the building.

The fire department was organized and started having meetings way before the land was acquired. During this time Louis “Red” Harris served as Chief, where he would serve from 1986 to 1991. Some of the members attending these meetings were Henry H. Bradby, Allen Bradby, Rita Wilkerson, Phyllis Bloxom, and Hubert Bradby, Jr. The outpouring support and eagerness was obvious during these meetings.

Carrsville Volunteer Fire Department was involved in getting the Rushmere volunteers ready for their first training. The assistance from the other departments were outstanding. Some donated equipment and firefighting gear while others provided training. The department even attracted members from outside the community. Charlottesville and Gloucester fire departments each donated a fire truck to the Rushmere station.

The firehouse that Rushmere built took eight years, $150,000, and a lot of work from residents. Rushmere Volunteer Fire Department went into service March 23, 1991. In 1991 Keith Jones was elected as the Chief. He served as Chief for 17 years. Brandon Jefferson took over as interim Chief in 2008 due to Chief Jones illness. Brandon Jefferson was elected Chief in 2009 and still holds this position today.

Currently, there are over 50 combined members on the role and we have opened the membership up to individuals to help strengthen our department. Rushmere Volunteer Fire Department has always been a very strong volunteer fire department. 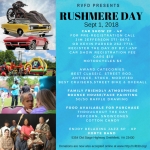